The Phase Displacement Space Drive is an enhanced version of the Electrodynamic Space Thruster. Both systems were designed to produce propulsive force in the outer space, using phase-shifted electric oscillations, without infringing the classical laws of physics (action-reaction), in order to overcome inherent limits of the expelling-mass propulsion systems.

The Phase Displacement Space Drive uses two transmitter antennas, phased 0° and 90°, and space-apart (nλ+ λ/4), producing attraction force, mediated by EM waves, between space and antenna at one extremity, and repulsion force at another extremity, generating net thrust force in an energy-efficient way.

And a lattice/matrix of Phase Displacement Space Drives, producing crisscrossing pattern of Phased Standing Waves, to generate a sequence of spinning waves for causing a FTL moving force, is that comprise its Relativistic Version in order to warp spacetime. 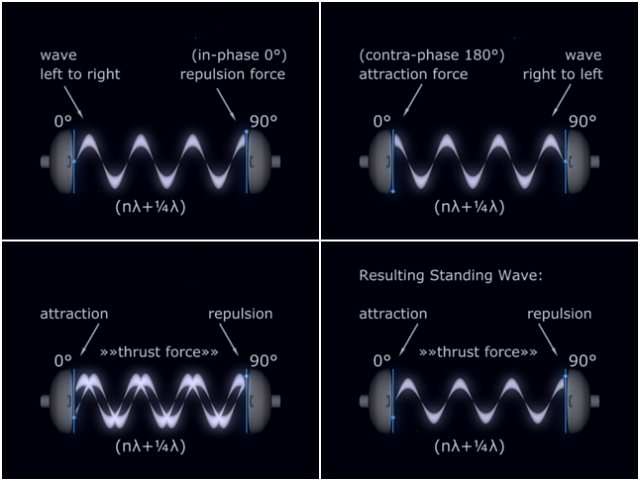 Even though electromagnetic waves have no mass, they still carry momentum in the direction of movement.

“radiation pressure, the pressure on a surface resulting from electromagnetic radiation that impinges on it, which results from the momentum carried by that radiation; radiation pressure is doubled if the radiation is reflected rather than absorbed.”   retrieved from Encyclopædia Britannica

The Phase Displacement Space Drive is comprised by two transmitter antennas (A and B, left and right), spaced quarter wavelength apart (nλ+ λ/4), each emitting respectively 0° and 90° phase-shifted waves. Starting from A, wave will face B with same-polarity (in-phase 0°), always repulsion force. On the other hand, starting from B, wave will face A with opposite-polarity (contra-phase 180°), always attraction force. Hence, the set of antennas will be displaced from left to right. Action-reaction will occur between the antennas and phase-shifted waves, and transversely between phase-shifted waves and the surrounding medium.

The impedance between antennas is high; hence higher RF voltage is required to convert electric power into thrust force.

It will be 50W/kg(50kW/tonne) @ 1 g-force(10 m/s²). Comparatively, even with heavy EM losses, it will be far more energy-efficient than any expelling-mass propulsion system which payload mass is 1% to 10% of the propellant mass.


In accordance with the Theory of Relativity, gravity and acceleration are equivalents, and both warp spacetime. And also, mass/energy cannot locally travel faster than the speed of light, but there is no prohibition in warping spacetime to make things appear faster than light. Spacetime itself has no restriction on the speed with which it can be stretched.

Due to phase’s differences, a linear moving pattern of spinning waves is created, trying to run downward faster than light, which is to warp spacetime producing an astonishing upward acceleration, propelling a spacecraft, at least at subluminal speeds, in a more energy-efficient way than expelling-mass propulsion. Expected energy consumption, not taking into account EM losses, is 50W/kg(50kW/tonne) @ 1g-force(10 m/s²).

Note: Standing Wave can momentarily disappear because it is the result of superposition of two opposing waves.

Alternatively, a simplified warp drive can be implemented with an array of plates spaced-apart ≈¼λ feed with RF in quadrature [0° 90° 180° 270°] ≈ [λ ¼λ ½λ ¾λ] for sequential FTL phase variation (f ≥ c/L) → (L ≥ λ) in order to warp spacetime for generating thrust force in a more energy-efficient way than conventional expelling-mass rockets by interacting with spacetime and/or EM fields that permeate the universe. It is to work similarly to an AC linear induction motor (v=Lf), wherein each plate is out-of-phase with each other, for sequentially producing a sequenced FTL pattern of alternating oscillations, for consequently generating a linear thrust force due to interaction with spacetime. Expected energy consumption, not taking into account EM losses, is 50W/kg @ 1 g-force. It can be powered by solar panels, radioisotope (RTG), and aneutronic fusion reactor. It can be also employed as an alternative to conventional DC tethers, like a shorter phased AC tether more suitable to interact with the magnetosphere, generating thrust force to change orbital altitude of satellite and spacecrafts. By eliminating the need to launch large amounts of propellant into orbit, it can greatly reduce the cost of in-space propulsion.